Lecrae - For the rapper, a new life, a new message

Lecrae Moore moved around a lot as a child. He was constantly the new kid in school. It’s often a struggle to fit in when you always have to make new friends but Lecrae had a gift. He could rap.
Street battles were no problem. Breaking into some freestyle for his classmates was a piece of cake. But walking a straight line was difficult.
Moore had a tough childhood. He grew up without a father. His male role models were rap artists like Tupac.
“My world view at that point in time was what I saw on television,” he said recently on a visit to CNN Center. “I just [rapped] about what I esteemed to be, what I wanted to be like. Most of that was gangsterism, false sense of masculinity, money, women.”
But Moore’s world view changed when he went to college at North Texas.  He met some Christians who helped pull the underlying faith out of him. It seemed to have always been there but he grew up straddling the line between God and the enemy, he said. 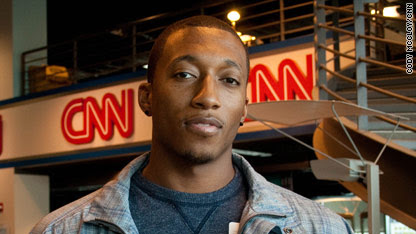 Christian hip-hop star Lecrae talks about how his life turned after he was almost arrested for drug possession
Before he went to college Moore said he was the drug dealer with a good-luck charm, a Bible his devout grandmother gave him. He knew he could turn to it if he got in trouble.
Trouble came one night when he was about to be arrested for drug possession. He sat in the back of the squad car, handcuffed, distraught and lost, preparing to go to jail, when the officer asked him about the Bible in Lecrae’s car.
The officer wondered, what is that doing on your backseat?
“I told him I know I need to live it,” Moore said. According to Moore, the officer said if Moore would agree to do that, he would let him go.
The turnaround wasn’t a complete 180, and it took more people to convince Moore to dig into the Christian life, including those Christians on his college campus. Afterward, some of them would hang around and would rap about Jesus. The street battler in him came out, and a Christian hip-hop artist was born.
I asked him: Is he a rapper who preaches or a preacher who raps?
An easy smile came across his face and his introspective eyes pondered for a second.
“I think every rapper is a preacher, it’s what’s the sermon that they are giving,” he said. “Every rapper is preaching something. They are either preaching that you can find satisfaction in a million dollars or 50 women, or that you are not a real man unless you are a killer."
“I just look at myself as another individual who has a different message and a world view that I think is the most beneficial, the most helpful, and I’ll be honest, it’s the right one. Maybe not mine specifically but I think a Biblical world view is the right world view.”
Moore’s latest CD is “Rehab,” which hit No. 1 on the Billboard Christian albums chart and the Gospel albums list, sold more than 26,000 copies its first week. It also hit No. 5 on the rap albums chart.
It is a product of Reach Records, which he co-owns in Atlanta, Georgia. The label has four other Christian rappers, some of whom Lecrae thinks will be even more influential than he has been.
Moore also founded ReachLife Ministries, which seeks to "bridge the gap between biblical truth and the urban context," he said.
Rehab is a statement, a message to all that while there is much wrong in this world, there is a way to reshape your life, he said. We all need a sense of purpose, but we're all a bit messed up.
“We are fractured; this is a fractured world, but there is rehabilitation available through Jesus,” he said. “He came to save. He came to restore.”
Moore is currently back out on the road on the "Unashamed" tour.
belief blog

Email ThisBlogThis!Share to TwitterShare to FacebookShare to Pinterest
Labels: Music