The Central Passage in The Lord of the Rings 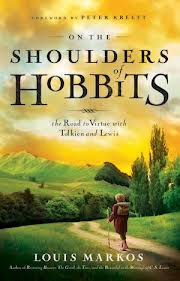 Louis Markos, in his new book On the Shoulders of Hobbits, which is hard to put down, though not nearly so hard as the books on which he is writing:

For me, the central passage in Tolkien’s long epic comes as Frodo and Sam are about to pass into Mordor, the dark and desolate land where Sauron and Mount Doom dwell. As they pause there on the threshold, Sam shares with Frodo a profound meditation on the nature of the Road and on the nature of stories. It is a speech to which we who live in an age that has lost both its sense of purpose and its sense of history—that knows neither where it came from nor where it is going—must carefully attend.

Sam and Frodo are living at the end of the Third Age. Behind them stretch ten millennia of mighty warriors, heroic battles, and timeless tales of adventure and self-sacrifice. But they are, of course, more than tales. They are the stage, the backdrop against which these two seemingly insignificant Hobbits act out their roles in the sacred narrative of Creation, Fall, and Redemption. Sam begins by reflecting back on those tales and those who lived through them:


“The brave things in the old tales and songs, Mr. Frodo: adventures, as I used to call them. I used to think that they were things the wonderful folk of the stories went out and looked for, because they wanted them, because they were exciting and life was a bit dull, a kind of sport, as you might say. But that’s not the way of it with the tales that really mattered, or the ones that stay in the mind. Folk seem to have been just landed in them, usually—their paths were laid that way, as you put it. But I expect they had lots of chances, like us, of turning back, only they didn’t. And if they had, we shouldn’t know, because they’d have been forgotten. We hear about those as just went on—and not all to a good end, mind you, at least not to what folk inside a story and not outside it call a good end. You know, coming home, and finding things all right, though not quite the same—like old Mr. Bilbo. But those aren’t always the best tales to hear, though they may be the best tales to get landed in! I wonder what sort of a tale we’ve fallen into?” (IV.viii.696)

As I hinted in the previous chapter, there is good reason to believe that Tolkien’s vision of the Road and of the call matured during the seventeen years that separate The Hobbit from The Lord of the Rings: a period that includes those dark and desperate years during which England faced annihilation by the Nazis. Though Bilbo’s journey had allowed Tolkien to recover for his age much of the old magic and many of the old virtues, it lacked the proper scope to encompass the full dimensions of choice and destiny that define Frodo’s journey. To accomplish that would take a greater tale, one that could live up to Sam’s high description.

In the greater tales, the ones that matter—the ones that change both us and our world—the heroes do not so much choose the Road, as the Road chooses them. For our part, we must be ready, prepared in season and out, to answer the call, whenever and however it comes. And we must be prepared to press on, trusting to an end that we often do not, perhaps cannot, see. It is easy to claim that we would have done what Abraham did, but that is only because we stand outside the story. We see the good end, the fulfillment that Abraham could not see from within the story.

Sam muses on these things, and then, in one of those flashes of pure clarification that come to all those who endure in a cause, he realizes that the tale he and Frodo have been landed in is not a thing isolated from the past, but marks the continuation and perhaps even culmination of a tale that began long ago in the First Age:


“Why, to think of it, we’re in the same tale still! It’s going on. Don’t the great tales never end?”

“No, they never end as tales,” said Frodo. “But the people in them come and go when their part’s ended. Our part will end later—or sooner.” (IV.viii.697)

I believe it was Pascal who said that only God can see the whole picture and every detail within the picture at the same time. In his moment of clarification, Sam sees that his individual call (and that of Frodo) is part of a larger tapestry in which each individual call works together to bring about the destined and hoped for end, what Tolkien liked to call the eucatastrophe: the good end that rises up, miraculously, out of what seemed, at first, to be defeat and death.

If we would be a part of that eucatastrophe, then we must be willing to trust the call, to enter the tale, to set our weary feet to the Road.

Email ThisBlogThis!Share to TwitterShare to FacebookShare to Pinterest
Labels: Tolkien