Alec Baldwin a Man Who Overestimates His Own Importance 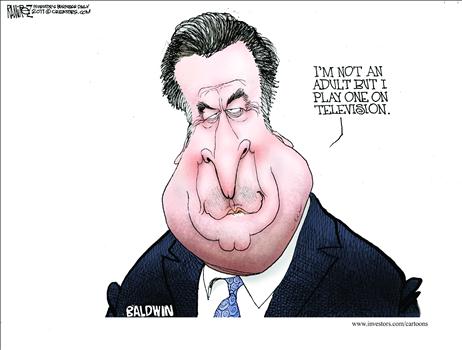 Hot-head Alec Baldwin was kicked off an American Airlines flight this afternoon in Los Angeles because he was playing a game on his phone apparently past the point when passengers are supposed to have turned off their devices.

"On an AA flight at LAX. Alec Baldwin was removed from the plane. We had to go back to the gate. Terrible that everyone had to wait."
Baldwin was aboard AA Flight 4, which was delayed an hour, when the "30 Rock" star was booted for not listening to the flight attendant.
Passenger Steve Weiss, who was sitting across the isle from Baldwin, described the scene.
"Apparently he said he was playing a game, but he was actually talking on the phone. She [the flight attendant] was very nice. The door was closed they just announced that they were pulling away from the gate. He got up threw his papers on the floor stormed into the bathroom slammed the door closed, beat on the wall and then came back."
"He said 'If you want to kick me off, kick me off.' He was just crazy, he just flipped out, the guy has problems."